Our Chalet is the first and oldest of WAGGGS World Centres. It opened in 1932 as a place where girls and adults from all over the world could come together, enjoy an
‘International Jamboree Experience’, be
challenged by the terrain and share the Girl Guide/Girl Scout Spirit while having
adventures in the Swiss Alps in the beautiful village of Adelboden in the Swiss Oberland.

Our Chalet is just outside of Adelboden, in the Bernese Oberland of Switzerland.Located in the Bernese Alps, it is 1,350 metres (4,430 ft) above sea level. This year (2012) it celebrated its 80th
anniversary.

Our Chalet, founded by Helen Storrow, opened in 1932. It has only been closed to the public once, during World War II when it was used as a military training and refugee centre. In the time since it opened, the Centre has been expanded and now includes several buildings. Our Chalet offers year-round activities, special events, and conferences for Girl Guides, Girl Scouts, and leaders from around the world. 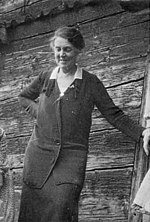 In 1929, WAGGGS met in Holland and decided to build a World Centre for Girl Guides and Girl Scouts worldwide.  An American Girl Scout leader, Helen Storrow (1864–1944), agreed to fund the
construction and the first four years of operation if it were built in Switzerland. Helped by Swiss Scout Ida Von Herrenschwand (1887–1961), also known as “Falk”, Storrow found several possible locations, including Grindelwald, which had unsuitable ground;
Kandersteg, which already had the Kandersteg International Scout Centre; and Aeschi. Favoured by Storrow for its beauty, Aeschi was proposed at a conference at Foxlease, UK. It almost passed, but Falk felt it was too low for winter sports, and Robert Baden-Powell, founder of Scouting, agreed.

After more discussion, the conference agreed upon several
important conditions. The site had to be near a main train line, but away from tourists. Hotels in the neighbourhood were also required, yet it could not be a fashionable place. The site had to be high enough for skiing in the winter and climbing in the summer while still suitable for those with heart trouble. It was also agreed that there should be sufficient ground around and pleasant neighbours.

Falk continued searching and turned up Adelboden, which she felt would be perfect. The contracts to buy the desired land from three different farmers were signed in December 1930. In June 1931, Storrow and the World Committee of WAGGGS came to inspect the site, which they approved. The name Our Chalet was chosen so that every Girl Guide or Scout would feel it was her home.

Construction of Our Chalet began with the basement in September 1931, and the roof was built on 21 December 1931, according to plans by architect M. von Sinner. Storrow returned in May 1932 to see the completed chalet, prompting Falk and others to hold a party at a village inn to celebrate the strong bond that remains to this day between the chalet and villagers. Storrow then decided that she wanted a separate, smaller house of her own where she could stay and receive guests to be ready in time for the official opening of Our Chalet. Named “Baby Chalet”, it is still open to guests.

The formal opening for both Chalets was on 31 July 1932 by
Storrow and Olave Baden-Powell with many villagers, Girl Guides and Girl Scouts from around the world, and Robert Baden-Powell in attendance. Falk became the World Centre’s first “Guider in Charge”.

The original plan was for Our Chalet to be open during the summer and for a brief winter holiday, but it was so popular that it soon opened to support the year-round demand.

Our Chalet was used immediately after its formal opening. First there was a meeting of the World Committee, and then sixteen girls from eight different countries stayed for a fortnight at the invitation of the Committee of the Juliette Low Memorial Fund, named after Juliette Gordon Low, the founder of the Girl Scouts of the USA.Many of today’s traditions are from the first year of operation.

On 24 August 1939 Our Chalet was full of Guides from all over Europe. A group of Guides set out for nearby Kandersteg, but the clouds of war compelled Falk to recall them, as she was responsible for their safe return. An all-out effort managed to return the Guides by 4 pm, despite significant protests. Falk’s concerns were shown to be well-founded when World War II broke out eight days later. Our Chalet’s staff quickly set upon the often difficult task of returning guests/ tourists to their home countries.

During World War II, the Centre was closed to regular guests, but the staff became involved in reuniting refugees, many of whom had Guiding and Scouting connections. The Centre was also used for training military skiers and interning foreigners. The Swiss Guides were the only Guides who were able to use Our Chalet during the war, except for some French Guiding Commissioners who showed up in 1942. Many refugees came to Switzerland during the war and the staff tried to accommodate them in Our Chalet, but this was not allowed in most cases due to wartime regulations. However, the staff did help them with relief funds from the Guides and Scouts of Switzerland, Great Britain, and the United States. The Our Chalet staff found great joy in helping reunite families who had been
divided by war. American Girl Scouts also donated substantial funds to Our Chalet in 1944, through the U.S.A. Friendly Fund, to help with postwar recovery efforts.

Also in 1944, Storrow died, leaving open the position of Chairman. It was filled by Anne Hyde Choate, another American and past
president of the Girl Scouts of the USA.

The leader of all Girl Guides and Girl Scouts, World Chief Guide Olave Baden-Powell, wasted no time helping rebuild Guiding in Europe after the war was over. She was at Our Chalet on VE Day, 7 May 1945, to reopen Our Chalet. Despite hardships obtaining travel visas after the war, Our Chalet was swamped with visit requests.

Conferences began again in 1946, with a Juliette Low conference held in July and an International Conference for Trainers in August. The first Germans, six leaders concerned about the nature of their welcome, arrived in 1948 and were treated like everyone else. The newly created Friends of Our Chalet fund helped with the remaining recovery efforts.